I have a love-hate relationship with stuffed animals. I love how cuddly they are. How relaxing they can be when we snuggle up with them. And how comforting they can be. When I tuck my kids into bed at night, if they're feeling scared or lonely, their beloved stuffie can give them just the right amount of comfort to fall asleep and feel secure. 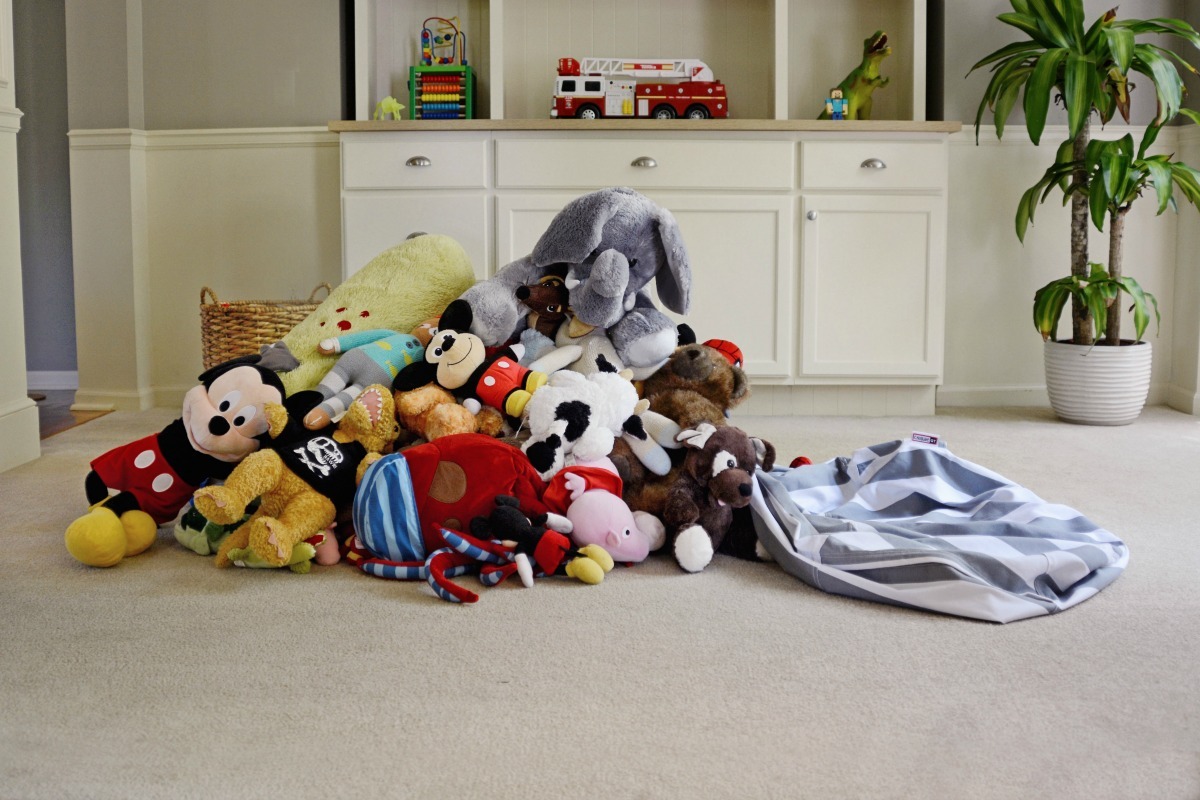 Before I knew it, they had taken over every surface in my kids' bedrooms. I get it because I adored stuffed animals at their age too.

And to be fair, stuffed animals are hard to part with. I mean really hard! It's like letting go of a longtime friend.

But when you get stuffed animals year after year and the ones in the must-keep pile are as high as a mountain compared to the ones no longer wanted, it seems like there is no good solution.

We've tried stuffed animal nets, over the door hanging storage, making them "decor," and still, I felt like the stuffed animals were out of control.

Or completely out of reach and collecting layers of dust.

I tried to tell the grandparents that we have more than enough stuffed animals to last us for...well, forever. And when we get near the giant stuffed animals at the store, I point in the opposite direction and tell the children they won't believe what there is at the other end of the store.

When it comes to stuffed animals, it's so hard because they are so lovable but so hard to let go of too. I thought we'd be in this never-ending cycle forever where we just kept accumulating more stuffed animals than what we gave away.

I couldn't keep up with it all without crushing my children's spirits and feeling like the Grinch myself.

A friend of mine sent me a gift one day. It was a Stuff 'n Sit aka a bean bag stuffed animal holder. I was grateful for any help with organization and decided to give it a whirl. Lots of times these things only last a few months, but it was worth a shot.

At least the design of the stuffed animal bean bag called the Stuff 'n Sit (affiliate link) was perfect, so I was happy to try it out.

But on the inside, I knew it would just be a matter of weeks before the bean bag broke or the kids completely forgot about it. Because none of my other stuffed animals storage ideas stood the test of time.

A day later, all of the stuffed animals were all over the floor again. 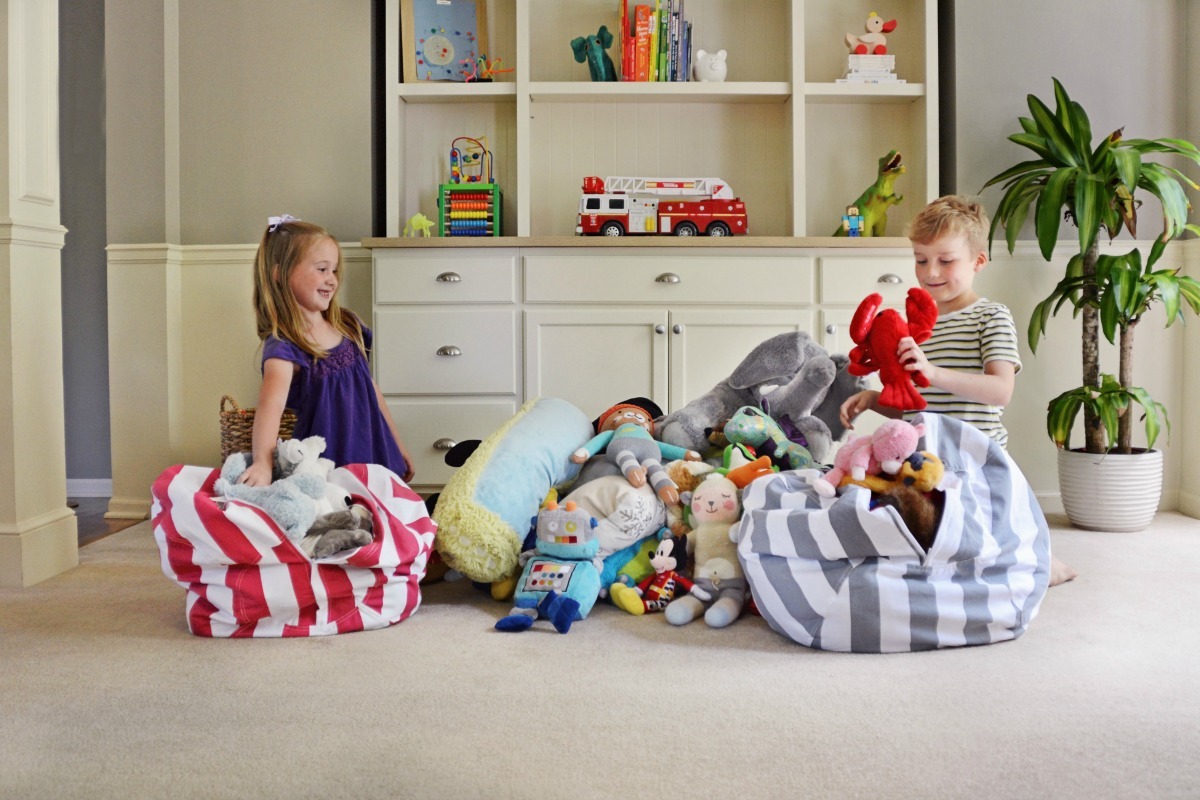 "Aha," I thought. He just wants to play with them, and this won't work.

So I said to my son, "Just be sure to put them back when you're done." As the night approached, I reminded him that all of his animals needed to go back into their home -- the stuffed animal bean bag.

I held it open for him, and he quickly put them all back. And again, the room felt nice and clean again. The Stuff 'n Sit was starting to grow on me.

The verdict is in 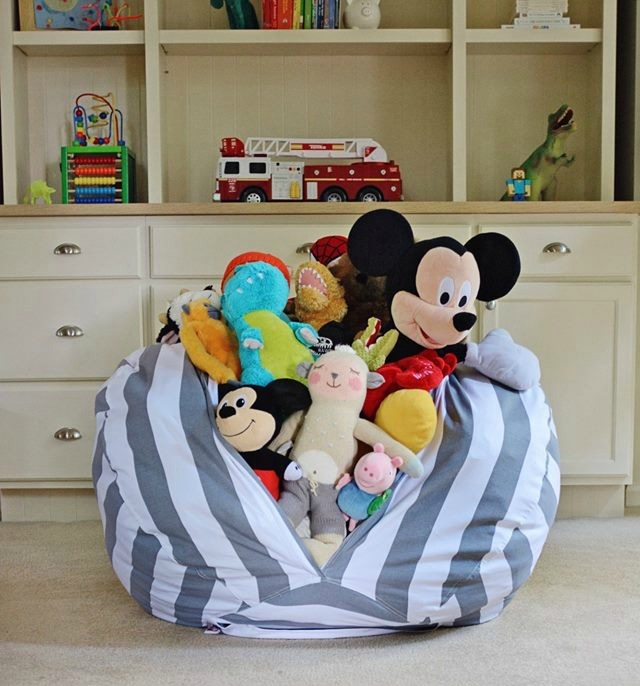 As the days passed I realized that the stuffed animals were still being used but easy enough to put back away with a small reminder. Definitely doable.

After several weeks and even months, I realized that we were keeping the floor clean. I mean, that's a minor miracle in itself!

And the only thing that had changed was having the stuffed animal bean bag.

Plus, the bean bag has stayed in awesome condition. Even with my kids carrying it around with the handle.

OK, so there was something about this Stuff 'n Sit stuffed animal storage bean bag. It's kind of magical actually.

For the first time ever, I have finally found a stuffed animal storage solution that works! One that could stand the test of time and that could keep up with our messy family.

But don't just take my word for it. Over the past few months, it has become a five-star best-seller on Amazon with over 3,000 reviews.

So now it's nice to know we weren't the only ones struggling with keeping up with the stuffed animals...and so many other people love theirs too!

So now the kids get to hold onto their stuffed animals longer, and I get to keep my sanity. 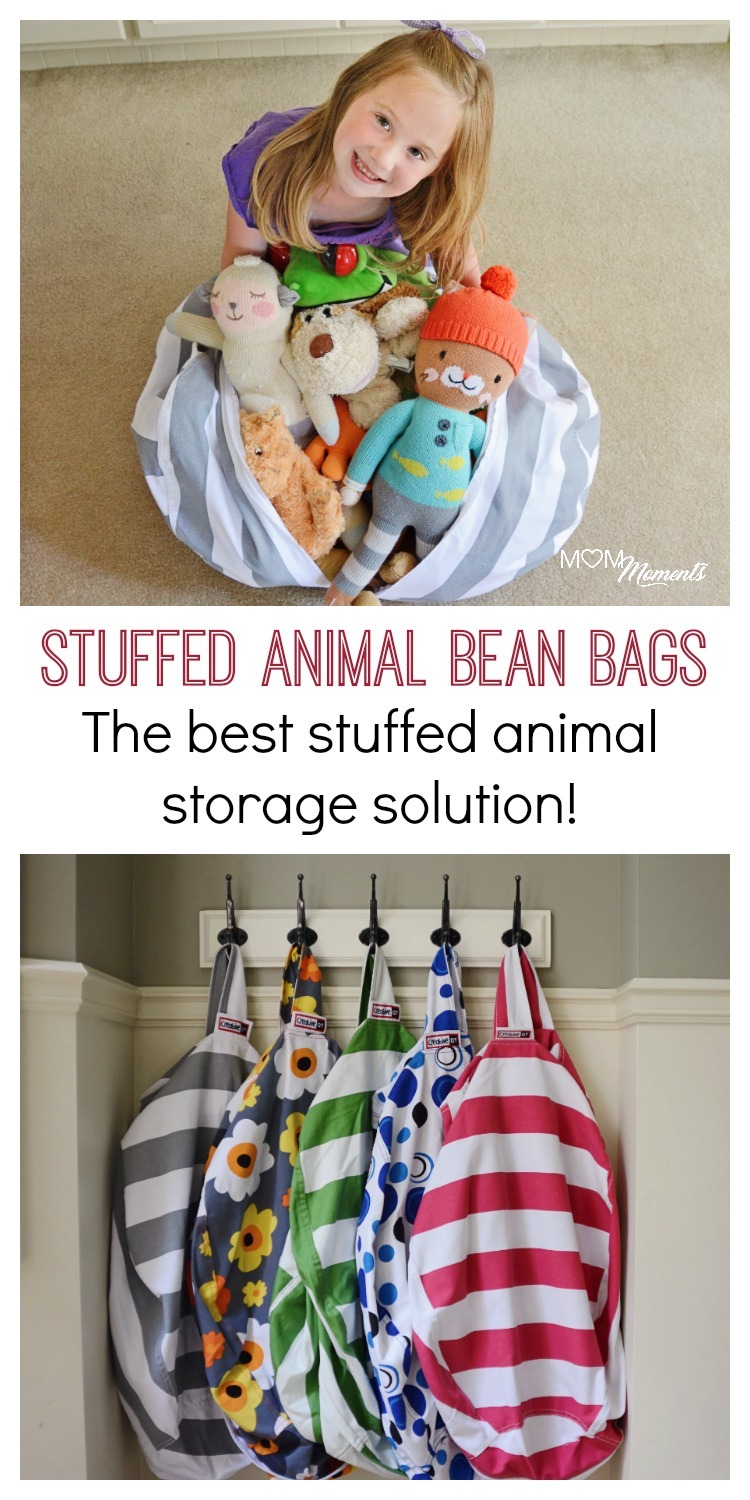 We are a participant in the Amazon Services LLC Associates Program, an affiliate advertising program designed to provide a means for us to earn fees by linking to Amazon.com and affiliated sites.

Keep up the wonderful piece of work, I read few posts on this internet site and I think that your blog is really interesting and holds bands of fantastic information.

The Planer Pro is a policy company Learn about Planer policy and know about it visit once https://theplanerpro.com/

Here is Best toolset with the best planer for the type of projects you are working on. The all inch planer is a real beast of a machine.

Our Phuket wedding planner service. It’s like having a bridesmaid on the ground with excellent local knowledge and access to the best Phuket wedding vendors and most stunning beach and ocean-view venues. Peace of mind and reassurance promised so you can focus on decision making and finding the dream wedding dress. https://thai-do.com/

Thai Do Weddings is the leading luxury wedding planning company in Phuket, Thailand, catering for weddings, parties, rentals and more. Get in Touch Today!

I think this is among the most important info for me. And i am glad reading your article. https://www.brandphic.com/

Get your custom logo design & website design by worlds best designers, we don't make logo, we design to make your business a brand. 100% refund guarantee if not satisfied.

Our SMS API is the most affordable, from marketing to OTPs, we deliver them all. We provide fast integration methods SMPP & REST API along with incoming.

The blog is full of beautiful features! It affects your ability to share your thoughts and share your experiences. I do not know if this is my blog! :) https://www.experttexting.com/

With Expert Texting mass text messaging capability, you can achieve more than 99.2% open & read ratio. A quality mass text messaging & text blast service with affordable & low pricing just as low as $0.0083 to USA. With this international bulk sms service, you can also enjoy other features like SenderID*, SMS API & SMS Gateway access and much more. Signup now and get 125 SMS Free.

Green juices usually start with fresh vegetables such as spinach, kale, broccoli or others as your base. In a study published in the journal "Cell" in 2011, researchers at the Babraham Institute in Cambridge, England, reported that cruciferous vegetables such as bok choy and broccoli contain a compound that boosts immunity and provides an extra layer of protection to cells in the body. Timing Is Everything

Sets the crayon back in it's box, pulls the little chain down on his lamp, https://www.homeworkclock.com and lays back in bed, alseep as soon as his brilliant head touches the pillow.

If you have a short deadline and willing to pay someone to do my homework for me then our online experts are the best source for your college assignments.

I give you address where you can enjoy the first game ever in windows history, and has been since http://spidersolitaire.me featured on most subsequent versions of Windows.

25 Simple Things That Mean a Lot to Kids

These simple things are a quick and easy way to show your child that you care.

These toy storage and toy organization hacks will take you from overwhelmed to organized!

The Special Bond Between Grandparents and Grandchildren

There is something magical about the relationship between grandparents and grandchildren, and the benefits are abundant.

The Gift of Down Syndrome

When my daughter came home from school talking about the girl in her class with Down syndrome, we were changed forever.

Teaching children to share is hard -- actually, it's nearly impossible and even unnecessary. Find out why sharing doesn't work and what to do instead!

Parenting doesn't come with a handbook, but these parenting books are as close as it gets.

The Importance of Sleep for Childhood Health

There is a strong correlation between a child's sleep and their health. See how much sleep your child needs.

5 Meaningful Ways to Connect with Children

Some days parenting looks like chaos and messes. These are five simple ways to connect with children in the midst of it all.

Chores for Kids: An Age by Age Guide

It turns out that chores for kids are actually a really good thing!

I said I would never be a minivan mom

I was a sports car enthusiast who met my husband at the racetrack. And I vowed that I would never ever own a minivan.